Step back in time with the NBA greats thanks to M&Ness with these Seattle Supersonics Shorts Green! 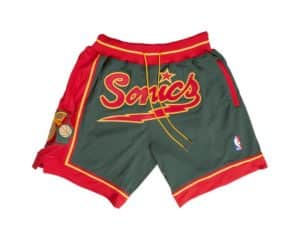 The Seattle SuperSonics, commonly known as the Sonics, were an American professional basketball team based in Seattle, Washington. The SuperSonics played in the National Basketball Association (NBA) as a member club of the league’s Western Conference Pacific and Northwest divisions from 1967 until 2008. After the 2007–08 season ended, the team relocated to Oklahoma City, Oklahoma, and now plays as the Oklahoma City Thunder.

Sam Schulman owned the team from its 1967 inception until 1983. It was then owned by Barry Ackerley (1983–2001), and then Basketball Club of Seattle, headed by Starbucks chairman emeritus, former president and CEO Howard Schultz (2001–2006). On July 18, 2006, the Basketball Club of Seattle sold the SuperSonics and its Women’s National Basketball Association (WNBA) sister franchise Seattle Storm to the Professional Basketball Club LLC, headed by Oklahoma City businessman Clay Bennett. The sale was approved by the NBA Board of Governors on October 24, 2006, and finalized on October 31, 2006, at which point the new ownership group took control. After failing to find public funding to construct a new arena in the Seattle area, the SuperSonics moved to Oklahoma City before the 2008–09 season, following a $45 million settlement with the city of Seattle to pay off the team’s existing lease at KeyArena at Seattle Center in advance of its 2010 expiration.

Home games were played at KeyArena, originally known as Seattle Center Coliseum, for 33 of the franchise’s 41 seasons in Seattle. In 1978, the team moved to the Kingdome, which was shared with the Seattle Mariners of Major League Baseball (MLB) and the Seattle Seahawks of the National Football League (NFL). They returned to the Coliseum full-time in 1985, moving temporarily to the Tacoma Dome in Tacoma, Washington, for the 1994–95 season while the Coliseum was renovated and rebranded as KeyArena.

The SuperSonics won the NBA championship in 1979. Overall, the franchise won three Western Conference titles: 1978, 1979, and 1996. The franchise also won six divisional titles, their last being in 2005, with five in the Pacific Division and one in the Northwest Division. Settlement terms of a lawsuit between the city of Seattle and Clay Bennett’s ownership group stipulated the SuperSonics’ banners, trophies, and retired jerseys remain in Seattle; the nickname, logo, and color scheme are available to any subsequent NBA team that plays at a renovated KeyArena subject to NBA approval. The SuperSonics’ franchise history, however, would be shared with the Thunder.